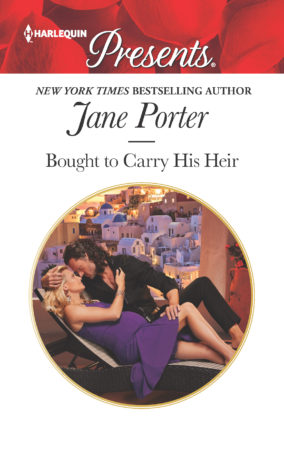 When Georgia Nielson is asked to be the surrogate for an enigmatic tycoon, she can’t afford to say no. Before she realizes that she’s struck a deal with the devil, she’s trapped on his isolated Greek island, with no escape from the brooding master who stalks its shores!

Scarred by the loss of his wife, Nikos Panos’s future rests on leaving behind a legacy. But Georgia’s constant presence threatens to unleash the powerful hunger he’s kept caged for so long. If he wants defiant Georgia to submit, he must confront the demons that haunt him…

When Georgia Nielson is asked to be the surrogate for an enigmatic tycoon, she can’t afford to say no. Before she realizes that she’s struck a deal with the devil, she’s trapped on his isolated Greek island, with no escape from the brooding master who stalks its shores!

Scarred by the loss of his wife, Nikos Panos’s future rests on leaving behind a legacy. But Georgia’s constant presence threatens to unleash the powerful hunger he’s kept caged for so long. If he wants defiant Georgia to submit, he must confront the demons that haunt him…

It was a cold February afternoon in Atlanta, but the law office of Lyles, Laurent & Abraham at One Atlantic Center on West Peachtree Street was even more frigid.

The prominent Atlanta attorney James Laurent fiddled with his glasses, his expression withering. “You signed the contracts, Miss Nielsen. They are absolutely binding in every country—”

“I have no problem with the contract,” Georgia interrupted, more annoyed than cowed by the attorney’s icy contempt, because she was absolutely committed to carrying the baby only to relinquish him. That was the job of a surrogate, and she took the job seriously. “The baby is his. But there is nothing in the contract that stipulates where I am to give birth, nor was anything ever communicated to me in advance about giving birth overseas. I wouldn’t have agreed to serve as Mr. Panos’s surrogate if that had been the case.”

“Miss Nielsen, Greece is not a third world country. You will receive excellent medical care in Athens before, during and after delivery.”

She gave him a long look, hands relaxed on the arms of the leather chair, fighting to keep her temper in check. “I’m a med student at Emory. I’m not worried about my medical care. But I am disturbed by your condescension. If a mistake was made, it was your client’s…or yours. You were, after all, the one who drew up the papers for the surrogacy. You know what the agreement covered. And it didn’t cover me getting on a plane and flying five thousand six hundred and sixty-six miles to give birth.”

“It’s a citizenship issue, Miss Nielsen. The baby must be born in Greece.”

Georgia Nielsen glanced past the attorney to the huge map that had been framed and hung on the wall of Mr. Laurent’s office. It was an old map, a collector’s item, and from the boundaries and labels, she’d guess it was from the late nineteenth century, the 1880s or maybe 1890s, with Africa divided by European colonial claims. But even old and yellowed, Greece was identifiable…right where it had been for thousands of years, giving birth to Western civilization.

And right where she was expected to give birth.

If Georgia were in a better mood, she might find it ironic. She might even be amused. But she wasn’t in a good mood. She was furious and frustrated. From the start, she’d taken care of herself, paid close attention to proper health and the well-being of the baby. Her job as a surrogate was to bear a healthy baby, and she was doing her part. Eating right, sleeping as much as possible, getting lots of exercise and keeping stress to a minimum—not always easy when in medical school, but she had her priorities right. But going to Greece? And going soon? That was not on her agenda.

“The travel arrangements are being finalized as we speak,” Mr. Laurent added. “Mr. Panos will send his personal jet for you. As you can imagine, the jet is state-of-the-art and quite luxurious. You’ll have staff and a good rest, and before you know it, you’ll be there—”

“I haven’t even reached the third trimester. Seems to me that making travel plans now is incredibly premature.”

“Mr. Panos would prefer not to place undue stress on you or the baby. Specialists do not recommend international travel in the third trimester.”

“Yes, for high-risk pregnancies, but this isn’t one.”

“There have been no complications.”

“And my client prefers to keep it that way.”

Georgia bit her tongue to keep from saying something she might regret. She understood that Nikos Panos concern was for the baby, his son. She understood, too, that her wants and needs did not factor in. She was a vessel…a womb…nothing more. As it should be until the very end, when she delivered a healthy baby and saw him placed in the arms of his protective father. That was when her job would be done. Then, and only then.

But that didn’t mean she wanted to leave Atlanta or the world she knew. Going halfway around the world would be stressful. Leaving her support systems would be challenging, especially as she neared the end of the pregnancy. This was a job, a way to provide for her sister, but she wasn’t totally naive. It was hard not to have any feelings for the life inside her, and those emotions were becoming stronger. Hormones were already shifting. She could only imagine how ambivalent she’d feel in another three and a half months.

But motherhood wasn’t her future. Her future was medicine, and her course was set.

For a long moment there was just silence in the office.

Mr. Laurent pressed his fingers together, creating a tense steeple. “What will it take to get you on that plane this Friday?”

Ridiculous. There was no way she could go so soon. “I have school. I have studies.”

“You have just finished the preclinical block. You are studying for the medical licensing exam, and you can study just as well in Greece as in Georgia.”

“I’m not going to leave my sister for three and a half months.”

“Yes, she’s a senior at Duke University, but she’s financially and emotionally dependent on me. I am her only living relative.” Georgia met his gaze and held it. “I am all she has left.”

“And the child you carry?”

“Isn’t mine.” Her lips firmed. “Your client paid for the egg and the surrogacy, so if Mr. Panos wants to be present for the birth of his son, he can come to Atlanta. Otherwise, the baby’s nurse will take the infant to him. As agreed.”

The attorney closed his eyes and rubbed at an invisible spot between his bushy gray eyebrows, bumping his glasses from his nose. For a moment the only sound in the room was the antique grandfather clock tick-ticking against the wall.

Mr. Laurent opened his eyes, fixed his gaze on her. “How much will it cost to get you on the plane on Friday? And before you say I’m not listening, I know everyone has a price. You do, too. It’s why you agreed to donate the egg and carry the fertilized embryo. You were satisfied with the compensation. So, let’s not bicker over the terms. Tell me what you need to get on that plane, and I will see that the money is wired into your account first thing in the morning.”

Georgia stared at the older man, her serene expression hiding her anxiety, as well as her frustration. Yes, money was tight, but she didn’t want more money. She just wanted to finish what she’d started. It had been a mistake to do this. She thought she’d manage as a surrogate, but lately she was finding it increasingly difficult to keep her emotions in check. But it was too late to back out now. There was no changing her mind, either. The contracts were binding. The child wasn’t hers. And, yes, she carried him, and each little flutter kick made her heart ache, but the baby was Nikos Panos’s, and she couldn’t forget it.

Which meant she had to move forward. It was her only option. And the moment she delivered, the moment the baby was whisked away, she’d black this year from her memory. Georgia never wanted to think about any of this again. It was the only way to survive something so challenging. Fortunately, she had practice in surviving challenging situations. Grief was a good teacher.

“It’s not about the money—”

“But it will pay bills, so pay your bills. Provide for your sister. I understand she, too, wants to attend medical school. Take advantage of the offer so you never have to do something like this again.”

That last bit hit home. Her gaze locked with his, and her short, filed nails curled into her palms.

Mr. Laurent was right. She could never do something like this again. It was breaking her heart. But she’d survived worse. And it wasn’t as if she was abandoning a child to a monster. Nikos Panos wanted this baby desperately.

Drawing a short, sharp breath, Georgia named an outrageous figure, a sum that would cover Savannah’s medical school and living expenses, plus some. Georgia made the sum deliberately high, intending to shock the old lawyer.

But Mr. Laurent didn’t blink. Instead he scribbled something down on a printed sheet of paper. “The addendum,” he said, pushing the paper across the desk toward her. “Sign here, and date there.”

She swallowed, shocked he’d so readily agreed to her “outrageous” demand. He must have been prepared for her to ask for even more. She probably could have asked for millions and he would have said yes. Stupid pride. Why couldn’t she be a proper mercenary?

“You’re agreeing to leave Friday,” Mr. Laurent said as she reached for the page. “You will spend the last trimester of your pregnancy in Greece, at Nikos Panos’s villa on Kamari, which is a short flight from Athens. After delivery, once you have been cleared to travel, my client will send you back to Atlanta, either on his private jet or first class on the airline of your choice. Any questions?”

“The money? It will be wired into my account first thing tomorrow?”

He handed her a pen. “It will be there by nine a.m.” He smiled as she signed.

“I’m so glad we were able to come to terms.”

Georgia stood, heartsick but too far in to see a way out. “As you said, everyone has a price. Goodbye, Mr. Laurent.”

Bought to Carry His Heir is available in the following formats: