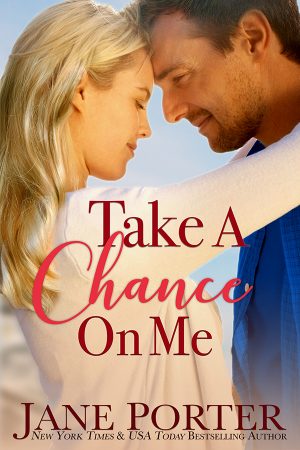 Book 3 of The Love on Chance Avenue Series

Savvy stylist Amanda Wright loves Marietta, her hair salon, and her clients, and no client is more dear to her heart than eighty-year-old Bette Justice–even if her years have made her a little fragile. So when Bette asks Amanda to help her convince her determined grandson, Tyler, a successful game designer, that Marietta is the right home for Bette, Amanda can’t say no.

Tyler Justice has a one-track mind–he wants to take care of his beloved grandmother. He can’t understand her resistance to move to Texas and is sure that the young friend she keeps mentioning–Amanda–is taking advantage of his grandmother’s generosity. He reaches Marietta determined to put the salon owner in her place and bring his grandmother home…until smart, kind Amanda starts to tug at his heart in ways he never expected.

But just as Tyler and Amanda start to form a real connection, will a long-buried family secret destroy their chance at love?

Savvy stylist Amanda Wright loves Marietta, her hair salon, and her clients, and no client is more dear to her heart than eighty-year-old Bette Justice–even if her years have made her a little fragile. So when Bette asks Amanda to help her convince her determined grandson, Tyler, a successful game designer, that Marietta is the right home for Bette, Amanda can’t say no.

Tyler Justice has a one-track mind–he wants to take care of his beloved grandmother. He can’t understand her resistance to move to Texas and is sure that the young friend she keeps mentioning–Amanda–is taking advantage of his grandmother’s generosity. He reaches Marietta determined to put the salon owner in her place and bring his grandmother home…until smart, kind Amanda starts to tug at his heart in ways he never expected.

But just as Tyler and Amanda start to form a real connection, will a long-buried family secret destroy their chance at love?

Book 3 of The Love on Chance Avenue Series

It wasn’t often that she had a stranger in her chair at The Wright Salon, much less a thirty-something-year-old male, that also happened to be impossibly handsome, as in the handsome of Hollywood hunk or romance cover hero.

Amanda Wright knew her romance cover heroes, too, as she and her sister Charity had lived off them growing up, surviving their harsh reality by living on fantasies and fairy tales.  Jenny, their oldest sister, had been appalled, and would confiscate their paperbacks, tossing them out if she found them.  Which is why Amanda and Charity learned to hide their romances between their mattresses, or stuff them inside the sleeves of their ugly, thrift store rainbow-hued winter coats.

Romance cover heroes were usually darkly handsome as well as inscrutable and enigmatic, traits not found in most small Montana towns.  No, in small Montana towns like Marietta, men tended to be polite, practical and dependable, and there was nothing wrong with practical and dependable men, but it just wasn’t exciting, and Mandy was holding out for a true romance hero, one that wasn’t just handsome, but a man that was powerful, successful, complex.  Enigmatic.

And her client, Ty James, could easily pass for the enigmatic romance hero with his thick brown hair, light eyes the color of the sea, chiseled jaw, and firm chin.  Never mind his lips which were pretty much perfect, especially when he smiled.  It was the smile of movie stars—confident, easy, sexy—which made it almost impossible to focus, which wasn’t a good thing as she was wielding very sharp scissors, very close to his strong tanned nape.

“You’ve been a stylist for a long time?” he asked, as she gently pressed his head forward a bit, trying to give her a better view of his hairline while also trying to hide his gorgeous reflection from her line of sight.  His good looks were distracting.  He, was distracting, and she didn’t normally fall for a pretty face.  In fact, she couldn’t remember the last time a man made her heart pitter pat, and it wasn’t just doing a pitter pat right now, but a full on, racing horse gallop.

“Nine years,” she answered, “six full-time.  The first three I was in college.”

“What did you study?”

“Psychology.”  She paused, ran her comb through the back of his hair, checking the length, making sure lines were straight.  She glanced up into the mirror, caught his eye, and noted his surprise.  “I like people.”

“You must get to know your customers quite well.”

“I do.  I’m very attached to my customers.” She paused, smiled ruefully. “Well, most of them.  There are a couple that drive me slightly bonkers, but they just make me appreciate the rest all the more.”

“What do the frustrating ones do to drive you bonkers?”

“Arrive thirty minutes late for a forty-five minute appointment, or forget to show at all.”

She smiled again, and shrugged.  “I have really good customers.”

His green gaze held hers in the mirror that for a moment she completely lost focus.

“I noticed you had more starred reviews on Yelp than any other stylist in town,” he said, snapping her focus back.

“I do encourage them to leave a review if they’re happy,” she answered.

“It’s a win-win, then.”  Amanda felt herself growing warmer by the moment.  What on earth was wrong with her?  Hand shaking, she reached for her colorful bottle on her station shelf and took a quick drink of water, trying to cool herself off. It had obviously been far too long since she’d spent time with an attractive man because this was ridiculous.  She was genuinely flustered.

“You have a name on the back of one of your chairs,” he said, watching her in the mirror.  “Is it a memorial?”

She looked to see where he was pointing and laughed.  “Oh, no.  No!  Bette is very much alive, as well as a very dear client and friend.  She did something nice for me and so I gave her her very own chair.  Only Bette is allowed to sit there, and that way she always knows I have time—and a spot—for her.”

“She must have liked that.”

“I think so.”  Mandy took a comb and drew it through his hair, checking the length.  “So you’re in town for a meeting tomorrow?”

“And you’re staying at the Graff?”

“I’ve never actually stayed there, but it’s fun to go for drinks or their Sunday brunch.”

“A couple times a year.  Just for special occasions.  Most of the time my sister and friends head to Grey’s.  More our style, as well as a lot less spendy.”

Tyler James Justice had expected Amanda Wright to be polished and stylish—she did hair for a living, after all—but he hadn’t expected her to be quite so pretty.

But she was pretty, strikingly pretty, and disarmingly sweet.  Make that charming.  For a moment he’d wondered if she’d had work done, and then he spotted the photo of three gorgeous blonde women tucked into her mirror, and asked, “Girlfriends or sisters?” as he nodded to the photo.

She steadied his head, preventing him from moving again.  “Sisters.  I’m the baby.”

“When was this picture taken?”

“My sister’s wedding a couple years ago.”

“Do your sisters live here in Marietta, too?”

“Charity does.  Jenny and her husband have a ranch in Colorado.”

“What does Charity do?”

Mandy didn’t answer immediately, her elegantly arched brows flattening as she concentrated on trimming the hair close to the tip of his right ear.  On one hand he was impatient for her to answer, but on the other he appreciated her attention to detail and not nicking his ear.

“She works for a Realtor on Main Street,” Amanda finally said, before tipping his head forward and taking a razor to his nape, cleaning up the back of his neck.  “I’m hoping, though, to eventually bring her here to help me manage the salon.”

“It wouldn’t be hard working with her?”

“Not at all.  Charity is my best friend.  We’re two peas in a pod.  Mom used to say we were more like twins than twins.  What about you?” she asked.  “Do you have brothers or sisters?”

He hesitated.  “I had a brother.  He died serving the country.”

Her hand went to his shoulder, her touch firm, warm.  “I’m sorry,” she said quietly.

He swallowed around the unexpected lump in his throat.  He rarely talked about Coby, and he never got emotional when he did, and he wasn’t at all sure why he’d mentioned his brother to her.

“I couldn’t imagine losing one of my sisters,” Amanda added.  “It must have devastated your parents.”

He nodded, unable to say more, because it had devastated them, and Coby’s death had changed the dynamics of the family.

“You said you were here for business,” she said, changing the subject.   “You must be in the ranching business then.”

“That must be fun.” Her eyes met his in the mirror.  She was smiling and it did something funny to his chest.

“You’re giving people something fun to do.  Good for you.  People need entertainment to help us unplug from the world, don’t you think?”

He found himself watching her as she took the big soft brush and went over his nape, brushing off stray hair.  “I do.”

He wished he’d been prepared for her, and not just how pretty she was with her high cheekbones and gleaming blonde hair pulled back in a high teased ponytail, but her kindness and good nature.  She reminded him of spring rain—sweet and refreshing—which wasn’t at all his impression of her before he came.

“How is the length?” she asked, turning the chair and handing him a mirror so he could see the back of his head.  “Any shorter?”

She laughed, and a dimple appeared at the corner of her full lips.  “Well, if you’re a game designer, you can be anyone you want to be.”  She unsnapped the black plastic cape, removing it from around his shoulders.  “How long are you in town?”

“Well, I hope you enjoy your stay.  Marietta is a great little town.  Everyone that comes here, falls in love—”

“—with the town,” she finished, laughing again.  “But what’s wrong with falling in love?”

California, he wanted to correct her, as he’d only relocated to Austin two years ago, but there was no point in telling her any of that.  They weren’t friends, and furthermore, once she knew who he really was, they’d never be friends.  The warmth inside of him cooled, and his smile faded.  Standing, he reached for his wallet.  “How much do I owe you?”

“Thirty-five.  And you can pay Emily.  She’s at the desk in reception.”

“Then leave a review,” she teased, reaching for the broom and dustpan tucked in the corner next to her station.  “And enjoy Marietta.  It’s a great place to be.”

“Not good enough,” she called after him.

He turned in the doorway to look back at her, all golden blonde and astonishingly pretty in the winter sunlight, and yet she was smiling at him in a way that made his chest ache.

She made him feel young and hopeful, just as he’d felt as a boy when he’d see a cute girl.  But he wasn’t a boy, and he wasn’t in town because he wanted to be, but because he needed to be.  He’d arrived to put distance between this woman and his grandmother, a move that wasn’t going to make him popular with anyone.  “Goodbye.”

Take A Chance On Me is currently available in digital format only: 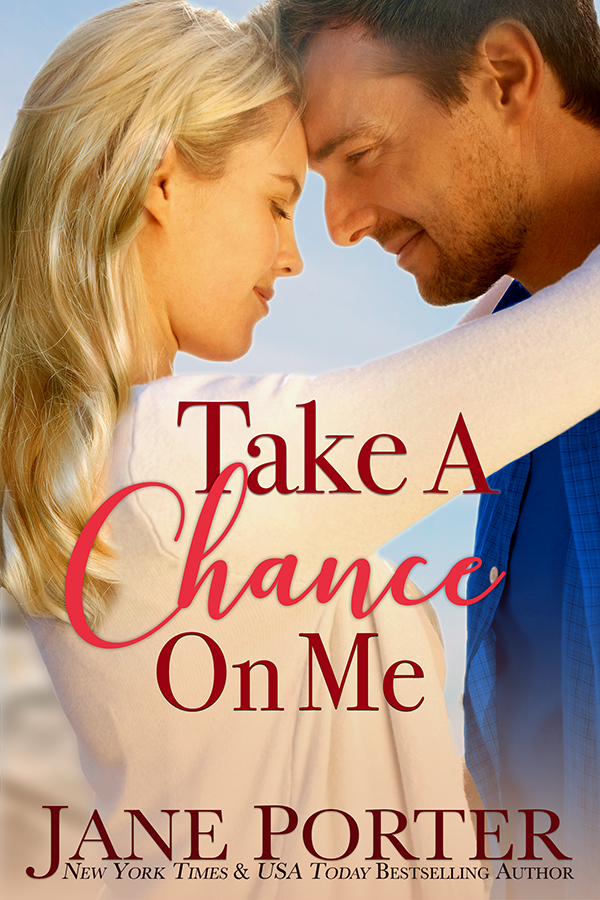