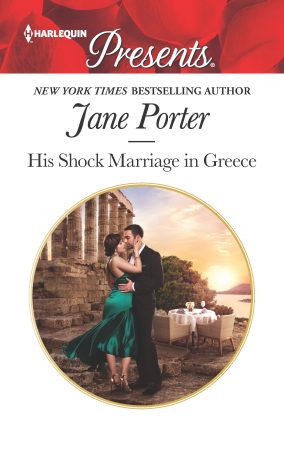 Scarred by his dark past, Damen Alexopoulos does not let emotion dictate anything — especially his choice of wife. So when his convenient society bride is switched at the altar for her innocent younger sister, Kassiani Dukas, Damen is adamant their marriage will remain strictly business. He’s too damaged for anything more. Yet Kassiani’s determination to know him — and the intense passion of their Greek Island honeymoon — could be this ruthless Greek’s undoing!

Scarred by his dark past, Damen Alexopoulos does not let emotion dictate anything — especially his choice of wife. So when his convenient society bride is switched at the altar for her innocent younger sister, Kassiani Dukas, Damen is adamant their marriage will remain strictly business. He’s too damaged for anything more. Yet Kassiani’s determination to know him — and the intense passion of their Greek Island honeymoon — could be this ruthless Greek’s undoing!

Kassiani Dukas tried to sit very still on the white slip-covered upholstered sofa in the corner of the expansive villa’s living room, not wanting to draw attention to herself as it would only lead to trouble.

She’d done nothing wrong but her father was furious and the last thing she wanted was him to turn on her.

Things were bad, though. Elexis was gone. Kassiani’s older sister was to marry Damen Alexopoulos tomorrow but Elexis had mysteriously disappeared in the night, managing to sneak away from the estate on the Athenian Riviera before flying out of Athens with friends more than willing to whisk her away from a wedding—and marriage—she’d never wanted.

And now her father was about to break the news to her groom, powerful Greek shipping tycoon Damen Alexopoulos, a man everyone knew to be brilliant, ambitious and dangerous if crossed.

She shuddered as her father, Kristopher, paced the gleaming marble floor, hands knotted behind his back, his complexion ashen. Nothing good would come of Elexis’s disappearance.

Damen Alexopoulos entered the villa’s living room, stealing Kassiani’s breath. She’d seen him before, on the night of Elexis’s engagement, but she hadn’t actually talked to him. It had been a party for others—very public, very extravagant with Elexis and Damen spending maybe just thirty minutes together—before he’d flown out, returning to Greece. He wasn’t classically handsome, but he had piercing hazel eyes, strong, arresting features and a full, firm mouth that fascinated her. He was also taller than she remembered, and broader through the shoulders, with a muscular chest and narrow waist and long lean legs.

Kass had never understood why Elexis hadn’t found him attractive, because as Greek men went, he was truly a remarkable specimen, but then her sister tended to prefer the up-and-coming models and actors who fawned all over her, each of those young, pretty males hoping to benefit from her wealth and fame.

“I was told you wanted to see me,” Damen said, his voice deep with a hint of a rasp that made the fine hair on Kassiani’s nape rise while her insides did a peculiar quiver.

A small muscle pulled in Damen’s hard jaw. Kassiani could tell he found her father annoying. That didn’t bode well for what was to come.

“It is always beautiful here,” Damen answered. “But I ended an important meeting to see you, having been told there was an emergency.”

Irritation and impatience made the rasp in his voice more pronounced, and his English more accented. It was clear he hadn’t learned English as a boy. Or at least, he hadn’t become fluent as a boy.

“An emergency? No,” Kristopher replied, smiling. “I wouldn’t call it that. I’m sorry you had to rush here, worrying.”

The muscle in Damen’s jaw worked again. It was clear he was fighting to hang on to his temper. “I don’t worry, and I don’t rush. But I am now here. Why was I summoned?”

Kassiani drew back in the corner of the sofa, as if she could make herself smaller. Not easy as she was a big girl…not tall like her sister, but rather, big boned, with even bigger curves—hips, breasts and the sort of generous backside that was fashionable if paired with a tiny waist. But Kassiani’s waist wasn’t spectacularly tiny. Her stomach wasn’t flat. Her thighs touched. Unlike her older sister, Kassiani didn’t have an Instagram account. She didn’t take selfies. She avoided photos at all cost.

Unlike stunning, photogenic Elexis, Kass didn’t photograph well. Nor was she part of high society’s inner circle. She didn’t travel on private jet planes, or party in Las Vegas, the Caribbean or Mediterranean.

Her father had never shown the least bit of interest in her, and why should he when he had everything he needed in his son and heir, Barnabas, and beautiful Elexis, who’d charmed him from birth with her big dark eyes and winsome pout?

Kass had never been a charming child. Family lore depicted her as silent and sullen, and impossibly stubborn. She reportedly scowled at guests, refusing to make small talk with her father’s important guests. She wouldn’t play the piano or sing, or bat her eyelashes at the visiting Greek dignitaries. Instead, Kass wanted to discuss politics with her father’s friends. Even at four and five she was fascinated by economics. She’d make predictions about the future of the shipping industry, and her audacity horrified her father. It didn’t matter that she read beyond her years. It didn’t matter that she excelled in math. Good Greek girls didn’t weigh in on national matters, or international policies and economics. Good Greek girls grew up and made good marriages with suitable Greek men and produced the next generation. That was their responsibility. That was their value. Nothing else.

It wasn’t long before Kassiani wasn’t included in the family parties. She wasn’t asked to dress up and come downstairs. She wasn’t invited to the dinners and weddings and reunions. She became the forgotten Dukas.

“I appreciate you coming straight away,” Kristopher said, still smiling, but less broadly. “I hate disturbing you but we have a problem.”

Kassiani’s father was a shipping tycoon like Damen, but Greek American, having been born and raised in San Francisco. She knew he was nervous, but his voice didn’t betray it. If anything, he sounded positive and optimistic. She was glad. One couldn’t ever betray fear in contract negotiations, and the merger of Dukas Shipping with the Alexopoulos empire through marriage of Damen and Elexis was the ultimate business transaction. A transaction that was now in jeopardy.

Her stomach knotted and cramped. There was no way her father could ever pay Damen back for the money he’d invested in the Dukas ships and ports. Her father lacked the means. The business and family were perpetually cash-strapped. It was why her father had sought out the merger five years ago. Dukas Shipping would fold without an investor. Damen had been the investor. He’d upheld his end of the deal, but now Kristopher had to inform Damen that the Dukases hadn’t kept their side of the bargain.

Nauseous, Kassiani looked out the villa window, seeking the view beyond. The sun reflected brilliantly off the villa’s whitewashed walls and bounced in cheerful rays off the water, the Aegean Sea so much brighter—a vibrant liquid turquoise—than the murky blue of the Pacific Ocean near her home in San Francisco.

“I’m not certain I understand,” Damen answered just as pleasantly, both men employing the same friendly tone, but Kassiani knew this was just a prelude to battle.

Her father and Damen were already fencing.

She glanced from her father to Damen. No, he didn’t look like a tycoon. He was too fit, too physically imposing. His skin was bronzed, and he had the toned, taut look of a man who worked in the shipyards, not at a desk. But it was his profile that held her attention, his features as chiseled and hard as the rest of him, the forehead high, cheekbones prominent, nose decidedly thick at the bridge, as if broken more than once.

He was a fighter, she thought, and he wouldn’t take her father’s news sitting down, which only made Kassiani even more grateful she was seated, tucked into a corner sofa.

“Elexis is gone.” Kristopher delivered the news bluntly, before adding, “I’m hoping to have her back soon, we just need—”

“I’m sorry. I must stop you there, Dukas.” Damen’s voice dropped, the rasp softening into almost a caress. “We don’t have a problem. You have a problem.”

Kristopher held his position but his ashen complexion seemed to pale yet again. “I’m aware of that, but I thought we should notify guests while there is time.”

“You promised me the best daughter five years ago. I expect you to deliver.”

The best daughter. Kassiani’s eyes stung and she bit into her lower lip to hold back the hurt and shame.

She hadn’t thought she’d made a sound but suddenly Damen looked at her. His expression was shuttered, his black lashes framing intense, dark eyes. She could read nothing in his face and yet somehow that brief glance skewered her, intensifying her pain.

Damen turned back to her father and his firm full lips curved ever so slightly at the corner, a contemptuous light in his gray eyes. “I will see you tomorrow at the church,” he said. “With my bride.”

And then he walked out.

His Shock Marriage in Greece is available in the following formats: