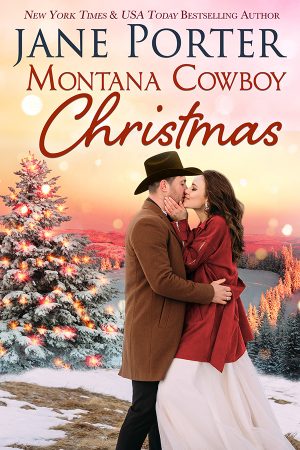 Book 2 of The Wyatt Brothers of Montana Series

It’s almost Christmas and nationally-ranked barrel racer Ivy Wyckoff has returned home to Montana desperate for a miracle. A cowgirl to her bones, she’s always solved her own problems, but when her ex—rodeo champ, Sam Wyatt—shows up offering more than a shoulder to cry on, Ivy’s tempted to grab the safety line he throws.

Sam Wyatt just wrapped his most successful year on the PRCA circuit. After long days and even longer nights, all he wants is a quiet holiday on his family’s Paradise Valley ranch…until he sees Ivy again. He can tell she’s in trouble. They may have called it quits two years ago, but she’s the one woman he regretted walking away from.

Sam will do anything to keep Ivy safe, including putting a ring on her finger and sharing his name with her this Christmas.

It’s almost Christmas and nationally-ranked barrel racer Ivy Wyckoff has returned home to Montana desperate for a miracle. A cowgirl to her bones, she’s always solved her own problems, but when her ex—rodeo champ, Sam Wyatt—shows up offering more than a shoulder to cry on, Ivy’s tempted to grab the safety line he throws.

Sam Wyatt just wrapped his most successful year on the PRCA circuit. After long days and even longer nights, all he wants is a quiet holiday on his family’s Paradise Valley ranch…until he sees Ivy again. He can tell she’s in trouble. They may have called it quits two years ago, but she’s the one woman he regretted walking away from.

Sam will do anything to keep Ivy safe, including putting a ring on her finger and sharing his name with her this Christmas.

Book 2 of The Wyatt Brothers of Montana Series

Sam Wyatt didn’t feel like leaving bed, not when it was warm, and his room was cold, but without getting out of bed there would be no coffee, and he liked his morning coffee almost as much as he liked his boots and horse.

Going downstairs meant he’d see family, and he wasn’t sure he was ready for that, either, not after last night’s rowdy family dinner.  The Wyatts had a lot of strong personalities, and put the four Wyatt brothers together, along with Mom and Grandad, things got loud, and heated, fast.

Billy and Tommy had always enjoyed stirring things up, while Sam liked things calm.  Consistent.  He was more like Joe in that respect, except that until Joe needed no one, but that had changed.  Joe had gotten married and then surprise, surprise, had fallen in love with his mail order bride, and was happier than Sam had ever known him

Sam was happy for Joe.  Maybe a little envious, too, but Sam didn’t feel much like exploring that thought—now, or ever.  He’d learned that serious relationships were work, requiring constant compromise and sacrifice, and he wasn’t sure he was built for compromise, or sacrifice, anymore.

No, he liked his solitude, and he was looking forward to having his own place.  He was scheduled to close on his new Wyoming ranch the day after Christmas.  Sam pictured his property outside Cody.  Hills, pastures, land.  Lots of land.  Good barns, stable, solid house.  Nothing luxurious but it had everything he needed for a successful business.  Sam knew cattle, and he couldn’t wait until he could build his own herds.

Leaving bed, he stepped into flannel pajama pants and tugged a sweatshirt over his head, wincing at the pain streaking through his shoulder. He’d reinjured his shoulder last week during the NFRs in Las Vegas, but he couldn’t complain, having walked away from this year’s National Finals as World Champion in Tie-Down Roping, and 3rd in Steer Wrestling.  Younger brothers Billy and Tommy had been there, too, and all three Wyatts had left with serious money, but this was Sam’s year, and earning a quarter of a million dollars went a long way to compensating for a torn rotator cuff.

Downstairs the kitchen was pleasantly warm and empty.  Sam reached into the cupboard for pain killers, washing the tablets down with a half glass of water, before filling his coffee cup.

Maybe he should just do the surgery, get it over with.  Letting his shoulder heal on its own could take ten to twelve weeks.  But he had four weeks, not twelve, before the new season began.  Problem was, surgery wasn’t always successful.

In his head, Sam planned his day.  His mom’s birthday was ten days away, and Christmas was seven.  Sam planned on going into Marietta and getting some shopping done, and then he’d stop in at the bank and make sure money was ready to be wired from his account so they could close on the Cody ranch on time.

Tommy and Billy knew about the property in Cody, but Sam still needed to tell the rest of the family.  He trusted there wouldn’t be hard feelings.  Joe might say he was upset, but Joe was married now and would soon have kids and the ranch would belong to his kids.  That’s just how it worked.

Floorboards squeaked overhead and he glanced up to the ceiling, the room directly above the kitchen belonging to his younger brothers.  A minute later Tommy descended the stairs, entering the kitchen in baggy sweatpants and nothing else. It was a little cool to be without a shirt but Tommy loved showing off his body, especially his eight pack abs.  Sam arched an eyebrow, silently mocking Tommy’s choice of attire.

“Guess who I saw last night?” Tommy asked, reaching for one of the glossy red and white Santa mugs lining the wide lip of the kitchen window, mugs that Joe’s new wife, Sophie, had put there, along with the plethora of Christmas decorations all over the house.  They’d never done much decorating at Christmas, but it seemed that no one had the heart to tell Sophie that.

Sam didn’t take the bait, and just waited as Tommy filled his glossy red Santa mug and then replaced the coffee carafe.

“Why didn’t you take one of the Christmas mugs?” Tommy asked.

“There was no Grinch mug,” Sam answered easily, lifting his brown feed mug with the faded logo. “Had to make do with this.”

“Sophie is excited about the new mugs.”

“I like it just fine.  Now who did you see last night?”

“You’ll never figure it out, not in a million years.

Tommy lifted his cup.  “Make at least one guess.  Humor me.”

“I humor you all the time.”

“Dang, you’re a grouch.” Tommy paused, took a sip, and then another, all the while eyeing Sam over the rim of the smiling Santa. “I was at the Wolf Den, does that help?”

Sam suppressed a sigh. The Wolf Den and was the seediest bar in town, probably the seediest bar anywhere in a forty mile radius. Truckers, bikers, and troublemakers liked to frequent the place. He personally avoided it, but he knew his brother had been there for a birthday party last night. His youngest brother liked to run a little wild, still.  “I don’t know since it’s not a place I like to go.”

“I’ll help you out. Someone you dated.”

This caught Sam’s attention. Someone he dated was working at the Wolf Den? He hadn’t dated that many people, not growing up.  Back in high school there been just two girls. Sam tended to settle into serious relationships, long relationships, rather than playing the field like Tommy. So if it was someone he dated, that meant it had to be Heather or Caitlin. But, Heather was married with four little ones, and Caitlin had moved away, somewhere in Texas, working for a big tech company. She’d always been smart, ambitious, and she’d gone off to college and never returned.  But had she finally come back?  “Caitlin?” Sam asked.  “Is she working at the Wolf Den?”

“I don’t know anyone else from Marietta I’ve dated.”

“I didn’t say she was from Marietta.”

Sam’s jaw tightened, and his stomach felt hard, tight as he slowly set his mug down. “Say that again.”

“Saw Ivy last night.” Tommy wasn’t smiling anymore. “And it was her, I know it was her. I even asked one of the waitresses. It’s your Ivy.”

“I don’t know. Once I thought I saw her looking at me, but when I looked her in the eye, she glanced away, and….” His voice faded. He shrugged. “To be honest, it just felt really weird and awkward. I think she was surprised see me, and I don’t think she was happy to see me, and suddenly I didn’t want to be there.”  Tommy went to the fridge pulled out the carton of half-and-half, and poured a generous measure into his cup. “She looked different, too. Hard to explain. She just didn’t look like your girlfriend anymore.”

Sam grabbed the half-and-half cart and returned it to the fridge, closing the refrigerator door a little more force than necessary. “That’s because she isn’t my girlfriend. She hasn’t been my Ivy for two years now.”

“Are you going to go see her? She’s working again tonight.”

Sam gave his brother and incredulous look.  “No, I’m not going to see her. Why would I do that?”

Tommy took his cup and walked across the room, grabbing a chair from the kitchen table and pulling it out. “But are you?” he demanded, sitting down.  “Are you really in a better place? Cause you could have fooled me.”

“Mind your own business, Tom.”

Tommy said nothing for a long moment, concentrating on his coffee, making a show of taking slow appreciative sips.  His broad, bare shoulders twisted, shifting the thick scar wrapped around his ribcage.  “You know best.  Maybe she’s not your girl now, but you still have a soft spot for her, and if it doesn’t bother you that she’s working in a modern day whorehouse –”

“Wolf Den is a strip bar, not a whore house. And I thought you said Ivy was a bartender, not a pole dancer.”

Tom shrugged. “You know the kind of guys that go there –”

Tommy just smiled, a dimple forming deep in his lean cheek. He gave his brother a look of pure pleasure.  There was love in his expression, but also a challenge.  They’d grown up loving each other, fighting each other, besting each other. It was just the Wyatt way. “Yeah guys like me, but because I know who Ivy is, I wasn’t hitting on her, and I wasn’t saying anything, and I wasn’t propositioning her. No sir, I kept my distance, and I was respectful, but Ivy is beautiful. Guys hit on her. They think she’s hot. I’ve got to tell you, she was getting a lot of attention last night, more attention than the dancers, more attention than the cocktail waitresses in their skimpy outfits and Ivy was just Ivy, in jeans and a t-shirt—“ he broke off, shrugged, “—sure it was tight, not that I was looking, but others were.  She’s got that body—“

“Enough about her body,” Sam growled.

“Sure Sam, whatever you say.  But before I shut up altogether, let me just add, that if you really care about Ivy–and you might not, because you’re right, you loved her a couple years ago and maybe you didn’t really love her, maybe it was just infatuation, maybe it was just a passing phase–but if you were ever her friend, I would check in on her, and make sure she’s okay.” And with that Tommy stood, grabbed his cup, and walked out of the room, leaving Sam alone.

Montana Cowboy Christmas is currently available in digital format only: