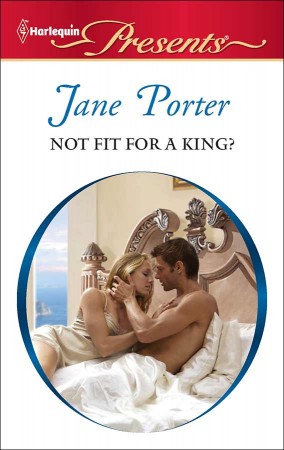 Book 1 of The Royalty Duo

It’s the stuff of fairytales: Hannah agrees to help out a princess, and within hours finds herself engaged to a king! But this dangerous charade has to end fast — the electrifying chemistry between them feels far too real!

Zale‘s royal bride-to-be looks like the pampered princess he’s being forced to wed — yet she transforms into a feisty woman who makes his blue blood run hot! But is she fit to be his queen? Zale will just have to tempt her out from beneath her tiara to find out!

It’s the stuff of fairytales: Hannah agrees to help out a princess, and within hours finds herself engaged to a king! But this dangerous charade has to end fast — the electrifying chemistry between them feels far too real!

Zale‘s royal bride-to-be looks like the pampered princess he’s being forced to wed — yet she transforms into a feisty woman who makes his blue blood run hot! But is she fit to be his queen? Zale will just have to tempt her out from beneath her tiara to find out!

Book 1 of The Royalty Duo

Hannah held her breath, trying to contain her panic. She was in serious trouble now, and the only way she—and Emmeline—would survive this disaster intact was by keeping a cool head.

Not that remaining cool and calm would be easy given that she was just about to meet Princess Emmeline’s fiancé, the powerful King Zale Ilia Patek, a man rumored to be as brilliant as he was driven, in front of his entire court.

Hannah knew nothing about being royal, or European. Yet here she was, squeezed into a thirty thousand dollar couture gown with a delicate diamond tiara pinned to her artificially lightened hair after having spent a long, and very frantic night cramming everything she could learn about Zale Patek of Raguva into her head.

Only a fool would appear before a king and his court, pretending to be his fiancée.

Only a fool, she repeated, knowing no one was holding a gun to her head, no one was forcing her to pretend to be Emmeline. No one but herself. But she’d pledged her help to Emmeline, given the princess her word. How could she abandon the princess now?

A long row of enormous chandeliers shone so brightly overhead that she blinked, overwhelmed by the glittering and hum of sound.

Hannah blinked again and focused on the throne dais at the far end of the room. A long red carpet stretched before her. Then a voice announced her, first in French, and then Raguvian, silencing the buzz of conversation—”Her Royal Highness, Princess Emmeline of Brabant, Duchess of Vincotte, Countess d’Arcy.”

The formal introduction made Hannah’s head swim. How could she have thought swapping places with Emmeline was a good idea?

Because she’d been too busy enjoying the decadent spa treatments, thinking herself lucky to have this escape before she returned to her exhausting, but fascinating life as secretary for impossible to please Sheikh Makin Al-Koury of oil rich Kadar.

Only Emmeline had never returned.

One of the ladies-in-waiting at Hannah’s elbow whispered, “Your Royal Highness, everyone waits.”

Hannah’s gaze jerked back to the throne at the end of the long red carpet. It seemed so far away, but then suddenly, somehow, Hannah was moving down the plush crimson carpet, placing one trembling foot in front of the other. She wobbled in her foolishly high heels, and felt the weight of her heavy silk gown with the thousands of crystals, but nothing felt as uncomfortable as the intense gaze of King Zale Patek as he watched her from his throne, his unwavering gaze resting on her face.

No man had ever looked at her so intently and her skin prickled, heat washing through her, cheeks on fire.

Even seated, King Patek appeared imposing. He was tall, broad shouldered and lean, and his features were handsome and strong. But it was his expression that made her breathless. In his eyes she saw possession. Ownership. They weren’t to be married for ten days but in his eyes she was already his.

Hannah’s mouth dried. Her heart raced. She should have never agreed to play princess here. Zale Patek of Raguva would not like being played the fool.

Reaching the dais, she gathered her heavy teal and blue skirts in one hand and sank into a deep, graceful curtsy. Thank God she’d practiced this morning with one of her attendants. “Your Majesty,” she said in Raguvian, having practiced that, too.

“Welcome to Raguva, Your Royal Highness,” he answered in flawless English. His voice was so deep it whispered through her, smooth, seductive.

She lifted her head to look up at him. His gaze met hers and held, demanding her full attention. She sucked in a quick breath of surprise.

This was the thirty-five-year-old king of Raguva, a country adjacent to Greece and Turkey on the Adriatic Sea. He looked younger than thirty-five. Furthermore, he was ridiculously good-looking. The photographs on the Internet hadn’t done him justice.

Impressions continued to hit her one after the other—short, dark hair, light brown eyes and a slash of high cheekbone above a very firm chin.

The intelligence in his clear steady gaze made her think of all the great kings and Roman rulers who’d come before—Charlemagne, Constantine, Caesar—and her pulse quickened.

He was tall, imposing, powerfully built. His formal jacket couldn’t hide the width of his shoulders, nor the depth of his muscular chest.

He’d been born a prince but had trained as an athlete and become a star footballer through dedication to his sport. But he’d walked away from his incredible success when his father and mother had died in a tragic seaplane accident five years ago that had taken the lives of all on board.

She’d read that Zale Patek had rarely dated during the decade he played for two top European football clubs because football had been his passion and once he’d inherited the throne, he’d applied the same discipline and passion to his reign.

And this man, this fiercely driven man, was to be sparkling, enchanting Princess Emmeline’s husband.

At the moment Hannah didn’t know whether to envy her or pity her.

“Thank you, Your Majesty,” she answered, slowly lifting her head to look into his eyes. His gaze met hers squarely and she felt a sharp jolt to her heart, her chest squeezing tight in protest.

It was like a thunderbolt of sensation—hot, electric—and her knees buckled, and her whole body felt weak.

Trembling in her heels, she watched King Patek rise and descend the steps of the dais. He reached for her hand, carried it to his mouth, brushing his lips across the back of her knuckles. The touch of his mouth sent yet another shudder through her, her body tingling from head to toe.

For a moment silence hung over them, surrounded them, an intimate, expectant silence that made her grow warm and her cheeks burn. Then King Patek turned her around to face his court. Applause filled the Throne Room and before she knew it, King Patek was introducing her to the first of his many advisors.

Moving down the crimson carpet, the king would pause to introduce her to this important person or that, but the sensation of his skin against hers made it impossible for her to concentrate on anything. The names and faces blurred together, making her head swim.

Zale Patek was in the middle of introducing Emmeline to yet another member of his court, when he felt her hand tremble in his. Glancing down at her, he saw fatigue in her eyes and a hint of strain at her mouth.

Time for a break, he thought, deciding the rest of the introductions could wait until dinner.

Exiting the Throne Room, Zale led her through a sparsely furnished antechamber, and then a small reception room, ending in the Silver Room, a room that had been a favorite of his mother’s.

“Please,” he said, escorting her to a petite Louis IVth chair covered in a shimmering silver Venetian embroidered fabric. An oversize silver and crystal chandelier hung from the middle of the room and Venetian mirrors lined the oyster hued silk that upholstered the walls.

It was a pretty room and it sparkled from all the silk, silver and glass, but nothing in the room could compare to the princess herself.

As well as cunning, manipulative and deceitful, which he hadn’t learned until after their engagement.

Not Fit For A King? is available in the following formats: 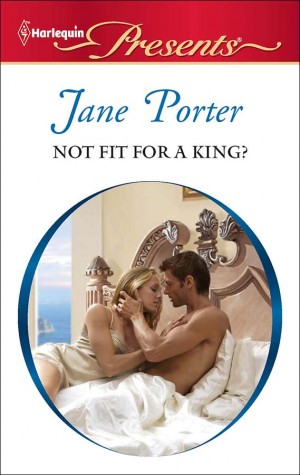